With building information modelling (BIM) solutions from FARO quickly becoming an industry standard, it’s no surprise that FARO shapes the way teams work together to communicate, collaborate and solve problems. The result is high quality projects being built more quickly and at a lower cost.

3D laser scanning with the FARO Laser Scanner aids building design at every stage of construction. With this 3D modelling tool you can compare the current 3D building status with the CAD model at any time – a quality control process which eliminates expensive and time-consuming rework.

3D scan brings the façade of the Adlon to life

The process is ideally suited for surveying façades, for example. The time and cost of measuring the façade grid and associated structures are reduced to a minimum with the laser scanner as, for example, no expensive scaffolding needs to be erected. This was the very process required in connection with the Festival of Lights – as a preparatory measure for a video that was to beprojected on the façade of Hotel Adlon. Spectacular light installations and animations illuminate some of Berlin’s historic buildings during the Festival of Lights. With two million visitors the festival has developed into an important economic factor. And companies appreciate the promotional value of the animations. In 2012 Volkswagen used the façade of Hotel Adlon as the background for a breathtaking promotional animation. And in 2013 too, the hotel acts as a projection surface for a three-dimensional video animation for VW. To be able to integrate the façade grid and structures into the video installation, the artists needed a precise, three-dimensional surface model with a scale of 1:10 to prepare for the event. The FARO Laser Scanner provided the digital data required for the exact modelling of the hotel façade within a few hours. The surveying work took place at night so that the hotel operations and traffic would be disrupted as little as possible. Three scans were made on the roof of the building opposite at a distance of 60 metres from the Adlon, six further scans from the road at a distance of some 30 metres and a six more ten metres away from the façade.

“With the 15 highresolution individual scans, we generated approx. 2,400,000,000 measuring coordinates,” Lars Sörensen, managing director of the Berlin consultant company Scan3D, explained. “More than enough to map out each and every façade detail exactly.” The scan data was then imported directly into the application LupoScan where the individual scans could be referenced on the basis of target marks. The application Rhinoceros was then used by the surveyors to model the façade surface. “That was necessary because we couldn’t use a forklift to position the scanner because of the location,” Sörensen said. As such, an extremely precise digital surface model was created, which was then used by the model builder. With the aid of the 1:10 model, the video artists were able to tailor their 3D animation precisely to the façade structure and target the hotel façade exactly with the projectors.

3D SurveyScan LLP acquired a Faro Focus3D in December 2011. They realised a potential in the market to offer a service using the scanner in various industry environments. 3D SurveyScan was amazed as to how little these industries knew of 3D scanning and point clouds. Even today, people from all industries are just beginning to realise the potential of using scanning to assist them in their day-to-day projects. Especially as BIM (Building Information Modelling)  is the way the government is pushing the industry forward with revit being the choice of software to model in. Before measurements would have been carried out by disto and tape measure. “The package 3D Surveyscan is offering is very flexible from providing a basic point cloud for the client to use themselves to model. Or we can give them the whole package including modelling services” states Ron Smith, co-owner of 3D SurveyScan LLP. So far 3D SurveyScan has produced quality packages for varying markets. Ranging from private dwellings, retail outlets providing floor and ceiling plans, to National Grid pumping stations, to office buildings including ceiling voids and heritage work. 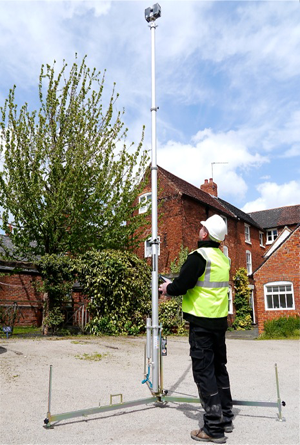 Scanning of glazed roof area of Leicester University Engineering Building
The heritage work of 3D SurveyScan included a project to scan the Engineering Building at Leicester University with its magnificent roof made of glass. Built in the early 1960s it is due a major overhaul to replace the glazing in March of 2013. It was the task of 3D SurveyScan to produce a point cloud for the client to model the new roof using revit. “Because of the size of the roof we scanned the building completing 16 workspaces averaging between 30 and 40 scans per workspace” Ron Smith pointed out. The workspaces would involve both internal and external scans. All targets and deadlines were completed on time for the project. Scanning took place over a period of 10 days. Registration of the scans was achieved using the FARO Software Scene 5.0 in combination with the laser scanner. Preparation was really important and checkerboard targets were used as the main form of correspondence. Spheres were used to gain registration into smaller rooms. Because of the size of the project a total station was used in conjunction with the Faro Focus3D to produce control conditions for the project.
7 meter mast
Often 3D SurveyScan has to measure roof voids and they had height problems for the scanner. Now they have been overcome with a unique mast system reaching up to height of 7 meters. To start the scanner automatically 3D SurveyScan LLP has acquired a Samsung tablet which links in to the WLAN system on the scanner. Ron Smith also highlights “FARO Webshare is to be a very important part to our business. It is a major advantage to publish the scan data on FARO Webshare to enable the client to view and share the date. Clients are fascinated to see they can gain access to measurable information via our server at our office. This information is of course protected at source so only the client can gain access to their personal information”.

Measuring of a museum

“Our task was to create a complete Building Information Management system as soon as possible, so that planning and construction work will be based on reliable information. To do this, we deployed teams working in two eight-hour shifts. One team was on site scanning with a FARO Focus3D laser scanner while the other team was processing the point cloud data. Work began on the 19th November and scanning was completed on the 20th December 2012,” explains CEO International Partner Buro, Marian Radoi.

“Before we acquired the FARO Focus3D, we worked with traditional surveying tools and methods,” explains Radoi. “But now, using FARO laser scanners, we can take on much more ambitious projects. Not only can we collect huge quantities of data, but the handling is easy and the workflow is fast.” To model the interior and the exterior including the roof, IPB made 2’474 color scans. When you generate a multi-billion point dataset, a good workflow is essential: so IPB used FARO Scene to process the point cloud data before exporting to Kubit software to create the 2D plans and the 3D modelling. But the FARO output is basically compatible with all the main 3D modelling packages. 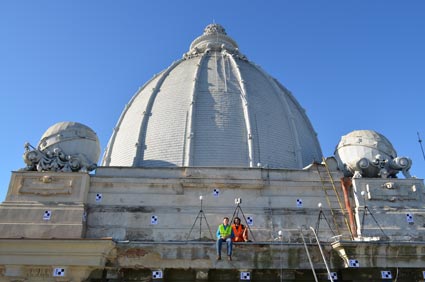 Creating the 2D plans for each floor took 10 man-days and creating the 3D models took 15 mandays. In total, IPB reckons that post-production will take about 2 months for the completion of all the deliverables.
Once the data is available there are plenty of further possibilities. For example, when parts of the building are closed for renovation work, tourists could still visit them in a virtual reality application. 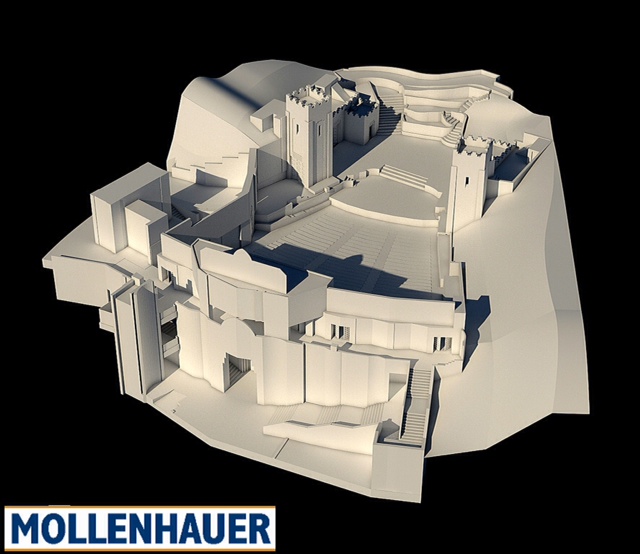 The data was processed in the Faro Scene software to create a registered point cloud of the basement up to the amphitheatre and tower levels. The software Cloudworx was then used to view and slice through the data in AutoCAD.
The scan data was combined with conventional survey data to create an accurate 3D CAD model of the theatre. The model is being used by both the Project Architect and the structural engineers to plan the redevelopment of the site. Of critical importance is the thickness of the poured concrete across areas of the Amphitheatre. The registered point cloud and 3D model will enable the engineers to view sections through the structure and analyse the relationship of the exterior to the levels below.
There were several benefits to using laser scanning technology. Laser scanning enabled the structure and surrounding site to be recorded in detail with relative ease and speed. The use of laser scanning also allowed details such as undulations in the concrete floors to be recorded, which was of great importance to plan drainage improvements.
Another important project was the accurate surveying of the existing Los Angeles Convention Center West Tower. The site is being redeveloped to incorporate a new NFL Stadium, which will position the Convention Center as one of the Nation’s premier destinations for sports and entertainment. The rear of the West Tower will be demolished to accommodate the new stadium. The Project Architect had some existing data but required verification of this information and supplementation to include the basement and plant rooms. 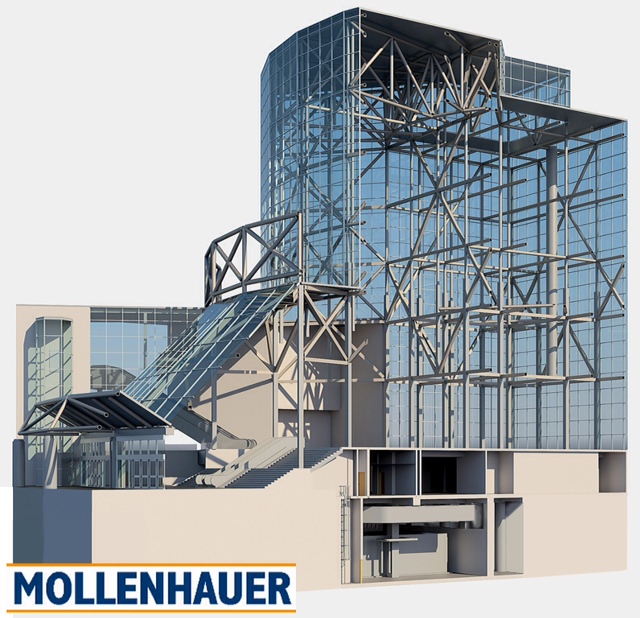 The West Tower was laser scanned using a FARO Focus3D  which captured the complex structure with ease and speed. The scan data was tied to the on-site control framework using total station control. The data was processed in Faro Scene software to create a single registered point cloud of the basement up to the upper tower level.

The scan data was used to create an accurate Revit Model of the West Tower to provide sufficient detail to the Project Architect to help design and plan the complex abutment of the proposed new stadium to the Tower. The existing foyer design is extremely complicated and surveying by other means would have been virtually impossible.

We have been using laser scanning for many years and use this technique on most of our measured building survey projects. The speed and the ease of use of the FARO Focus3D enabled us to record interior spaces rapidly and accurately reducing time on site, says Jenny Clark, the Director of 3D Surveying at Mollenhauer Group. “Another main advantage was the ability to publish the scan data on FARO Webshare (at no additional cost) to enable the client to view and share the data”.