Critical in protecting the integrity and safety of a bridge, engineers must be able to provide exact measurements of concrete and steel designs for bridge construction and as-built documentation.

Survey and inspection of bridges in the Province of Naples

Siteco used its Mobile Mapping Road-Scanner3 system, equipped with three FARO Laser Scanner Focus3D, for a project commissioned by the Province of Naples that included the survey of 37 bridges. This allowed them to achieve excellent results in times that would be unthinkable with traditional surveying techniques.

The methodology used for this project required both moving and static scans, thus allowing the optimal exploitation of the features of the Focus3D which fits to both scanning methodologies. 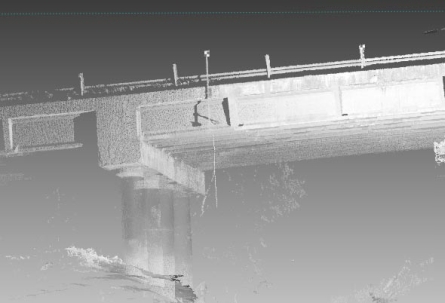 The three FARO Focus3D installed on the new Siteco’s Mobile Mapping System (MMS) allow three-dimensional laser scanning in motion. The Road-Scanner3 thus proves to be particularly suitable for scanning road infrastructures such as bridges and viaducts, since the work can be carried out without stopping traffic.

The extradoses of the bridges were surveyed with the vehicle equipped with the Mobile Mapping System at normal operating speed, with obvious advantages in terms of the speed of execution and completeness of the survey. For road overpasses, the intradoses were also surveyed in motion by driving along the roads under the bridges. In contrast, works on railways or waterways require static scanning in Stop & Go mode, with the relative topographic framing.

Thanks to the three FARO Focus3D, Road-Scanner3 can capture almost 3 million points per second, with a mirror rotation speed of 100 Hz. Taking into account the surveying speed of 30 to 40 km/h, the density of the points obtained is comparable to that of a static scan, with the additional advantage of eliminating areas of shadow or limited coverage due to low radius incidence and distance.

Road-Scanner3 has an inertial platform and a GPS receiver to acquire position and attitude at a frequency of 1,000 Hz.  This allowed the direct georeferencing of the point clouds.  In this way, even while making several passes, the point clouds were already topographically coherent with the structures. The related film clips, made with seven high-definition cameras, and the point clouds were assigned to each of the different passes. These film clips are viewable with Siteco’s Road-SIT suite of applications, which also supports the geographic querying of the images. 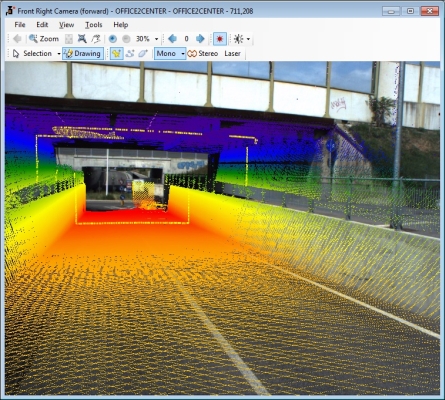 The first processing of the point clouds consisted in removing the points external to the structures, such as vegetation.  This was done using SCENE, FARO’s scan-data processing software. Once “clean” point clouds were obtained, it was possible to “assemble” them to reconstruct the structures in their entirety.
Once the point clouds were processed, the technical drawings of the structures were produced, including all elements such as sections, perspective drawings  and profiles. Moreover, the final outputs produced included a complete mapping of the main defects found on the various components of the structures (beams, pillars, deck, supports, etc.), classified by type and importance. The database thus created was delivered to the Province of Naples.

Road-Scanner3 is also used with great results for other high-precision topographic surveys. In fact, the functions of point cloud editing and calibration through the use of control points, allow the execution of highly accurate surveys in incredibly short times, not comparable with static working methodologies.

Focus3D, a high-performance 3D laser scanner with intuitive touchscreen control offers rapid and exact measurements of buildings, construction objects, structural analysis and maintenance, free-form components inspection or for example huge steel constructions like bridges. In this project TPI created a precise 3D documentation of the current status of a bridge located close to Rzeszow, Poland. The scanning of the bridge took 20 minutes, vectorization of recorded scans: 30 minutes and the export of the data to AutoCAD only 10 minutes. In total TPI spent for the whole project only 1 hour!