FARO understands that teaching students the concepts and applications of measuring arms, laser trackers and laser scanners will give them a competitive edge when they move on from the classroom to manufacturing industry or scientific research.

Virtual dissection of the human brain with the FaroArm 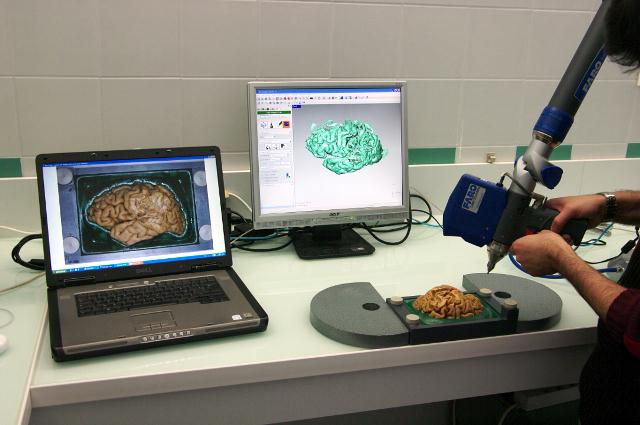 For nearly three years, several teams at the University François Rabelais of Tours have been working on a project for the virtual dissection of human brain fibres, the Fibratlas project. This multidisciplinary project combines MRI imaging researchers from the INSERM U930 unit, anatomists from the anatomy laboratory of the Faculty of Medicine at Tours and computer scientists from the computer lab at Tours (LI, EA2101). The goal is to generate “ground truth” data in order to confirm the results of algorithms reconstructing brain fibres based on MRI images (tractography).

In the scope of this project, the researchers are conducting a dissection of the two hemispheres of the human brain by stages. The specimens are collected from bodies which have been donated to science. As dissection is a destructive process; it is necessary to preserve a record of each step. As a first stage, they record the results from each step in the dissection of the cerebral hemispheres using a FARO ScanArm laser scanner, and then register these results using common reference points spread on the scanned surfaces. The neuroanatomist then “replays” the dissection virtually in order to identify the visible portions of the fibre bundles at each digitized step. These portions are then used to reconstruct the entire fibre bundles being studied. The results obtained are compared to the reconstructions of the same bundles based on MRI images in order to confirm the tractography methods used in medical imaging.

As the precision of the MRI is in the range of mm3, the research team needed a more accurate 3D measurement system in order to produce an extremely precise digital model of the dissected specimen.

The team selected the FaroArm Fusion 7-axis measuring arm and its ScanArm V2 laser digital sensor to digitize the brains in 3D during their dissection. The brain is treated so that it is firm enough not to be deformed by the dissection. It is then attached to a plate on which the reference points are scanned by the touch sensor. The laser head is then used to digitize the remainder of the sample. The arm offers an unmatched freedom of movement, such that it can be revolved around the sample in order to digitize the entire surface.

“The precision and speed of measurement of the FaroArm Fusion were decisive in terms of the selection of the portable CMM for the scientific team, as the digital sensor is capable of scanning more than 19,000 points per second,” noted Mr Serres, doctoral researcher at the computer lab of the University of Tours. “Furthermore, its small footprint and its manoeuvrability made it extremely easy to integrate into the anatomy laboratory.”

The researchers are now continuing their work in compiling the data and developing the software. The tool created will also serve both as a basis for training neurosurgeons and navigating between the different dissection steps of the brain and as a basis for research work evaluating the results given by diffusion MRI.

About the customer
U930, located at the Teaching Hospital (CHU) in Tours, is composed of 5 teams of researchers and practitioners. The main goal of the team involved in the project is one of creating and confirming imaging methods which can be used in clinical research in order to help understand the physiopathological mechanisms involved in the development and functioning of the human brain.

The LI is composed of computer science researchers, and is particularly interested in creating new methods and improving algorithms and their applications in the medical field. The Fibratlas project makes use of laboratory capacities with regard to 3D data acquisition and interactive scientific visualisation.