Within a very short time after a crime, urgent steps must be taken to avoid deterioration of the scene and loss of evidence. The FARO Laser Scanner can mitigate the risk by quickly scanning a scene to record a detailed 3D point cloud overlaid with color images. This 3D forensic documentation captures the entire scene before the site is compromised. With this digital evidence, forensic scientists can examine the scene at a later date for lines of sight, a bullet trajectory or a blood spatter analysis. 3D scanning turns crime scene sketches into a digital forensic tool.

Accident investigations also benefit from this development in digital forensics – using data from 3D laser scans can create a fully digital accident reconstruction through 3D simulations of the event. With the FARO 3D laser scanner, forensic tools have made the leap from 2D to 3D.

Given the important work undertaken by the world’s Forensic Investigators, members of the profession are constantly on the look-out for effective tools that can aid them in their inquiries and enable the presentation of high quality evidence to juries. One such advanced technology that is being increasingly used within this demanding area is 3D laser scanning.

As the global leader within the field, FARO Measurement Systems has established a reputation for supplying the world’s Police Forces with high-quality, easy to use 3D Laser scanning equipment that is ideal for use within the challenging field of Forensics.

FARO 3D laser scanning devices are able to rapidly and accurately capture millions of data points at a crime scene and create a 3D point cloud that allows the virtual viewing and thorough examination of the environment under investigation. The extremely precise, computer generated graphical models produced by FARO’s 3D Laser Scanners and software can be exploited in a wide range of investigative areas, including crime, road accidents and fires.

As crime scenes often need to be documented and evidence gathered within very challenging time scales, when compared to traditional methods the portable, rapid action nature of FARO 3D laser scanning renders it the ideal technology for this demanding work. Previously, conventional tools such as tape measures, measuring wheels, and both still and video cameras have been used to gather important data. In addition to the time taken by some of these traditional tools, their intrusive nature also has the potential to compromise crime scenes.

Replacing traditional methods, laser scanners offer an innovative approach to processing and documenting crime scenes. Rather than being selective as to what aspects of a complex environment to record, laser scanners are able to comprehensively and accurately document the entire scene in great detail. Following a typical 5 minute, 360° scan of a room, investigators are able to capture millions of data points and secure measured details down to a millimetre. The created permanent record also allows further in-depth analysis of the crime scene at any time in the future.

In addition to crime scene documentation, the photorealistic 3D model, generated following FARO 3D laser scanning, provides excellent courtroom presentations and full-colour virtual walk-throughs, that are invaluable to juries’ in their deliberations.
Having experienced the many advantages of using 3D Scanning in a recent high profile case, Richard Hek, of Lancashire Police, located in Preston, UK, is now a keen advocate of the technology, he explained. “As a Multimedia Forensic Officer, working in a Digital Forensic Scientific Support Department, part of my brief is to investigate suitable technologies for use in our work.” 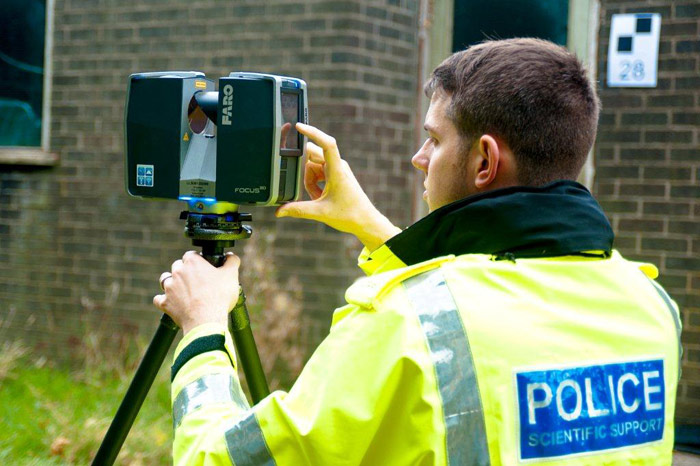 “Some time ago, having identified 3D Scanning as a technology that would give us a range of major benefits, armed with a list of requirements, I witnessed demonstrations of suitable systems from several manufacturers. Although some of the available scanners and software had many of the desired attributes, the Faro Laser Scanner Focus along with FARO’s Scene software was the only system that satisfied all of our stringent demands.”

Mr. Hek adds “As our FARO equipment is very light and portable, we are able to use it in a wide range of situations. The FARO Laser Scanner Focus is extremely easy to set-up and use and has been invaluable for quicklyand accurately documenting crime scenes. Not only does the gathered information aid our investigations, the accurate 3D reconstructions provided by FARO’s Scene software have been an extremely helpful aid in illustrating complex crime scenes to juries.”

“Although the use of our Faro Laser Scanner Focus was only a single component in a recent high profilecase, involving a fire and multiple homicides, the system played a significant role in the investigation, the delivery of high quality presentations to the jury and the eventual conviction”, pointed out the Multimedia Forensic Officer.

“The use of the Faro Laser Scanner Focus enabled our forensics team to quickly and accurately capture the crime scene in 3D. The faithfully created 3D reconstruction and record of the crime scene provided multiple advantages, including allowing the case’s investigators to gather importance evidence, substantiate witness’ testimonies and to scrutinise and test a range of theories related to the investigation.”

“In addition, when the case went to trial, the use of our FARO equipment enabled us to provide the jury with precise visual reconstructions and representations of the crime scene. Such was the quality of the presentations, relating to what could have been a very difficult to comprehend crime scene, the jury was able to understand all of the pertinent features” adds Mr. Hek of Lancashire Police.

The smallest and lightest laser scanner currently available – Focus3D is the ideal tool for both indoor and outdoor applications. The fast and accurate Laser Scanner Focus3D offers all of the features expect from a professional 3D laser scanner – with FARO’s established and well-known level of simplicity. Focus3D X 330 offers extra-long range – 330m, integrated GPS and the possibility to perform scanning even in bright sunlight. Remote scanning as well as almost limitless scan data sharing via SCENE Webshare Cloud make the laser scanning solution truly mobile.
The FARO Focus3D is supported by a number of industry-standard laser scanner software packages, including FARO and 3rd. party products. These packages provide extensive facilities for point-cloud processing, photo-realistic modelling, reverse engineering of CAD models and geometric calculations.

The DFET serves the Czech Department of Justice with reliable court evidence. It uses the FARO Focus 3D for baseline data to form the basis of a forensic accident evaluation and reports.
While new technologies are used to entertain viewers of TV crime series, the real Crime Scene Investigators are hard at work, pushing the boundaries of forensic science, documenting cases, and baselining real-world events.

This is the job of Michal Frydrýn and his colleagues at the Department of Forensic Experts in Transportation (DFET) at the Czech Technical University (CTU) in Prague. Serving the country’s police departments or its courts, the team uses their expertise to analyse road traffic accidents. They visit the site, document the scene and submit a forensic report. 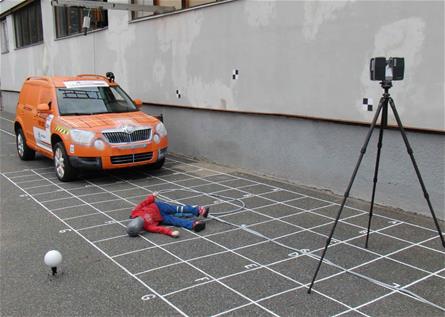 “The requirement for these reports drives our own baseline research,” explained Michal. “Recently, we examined the passive safety of cars specifically in relation to the protection of child pedestrians. It is a long term project that actually took us three years: we created a specialized forensic laboratory on university premises, fitted it out with appropriate equipment, including traditional measuring tools and suitable anthropomorphic test devices (crash test dummies) and then ran a programme of testing and evaluation.”

Michal explained that for the final year of the project, the DFET employed a FARO Laser Scanner Focus 3D: “The arrival of the FARO scanner means we won a substantial improvement in our baseline data and 3D documentation.

Within the carefully controlled laboratory environment, we accelerated a Skoda car to speeds of 10, 20 and 30kph and allowed it to strike a P6 crash test dummy. The dummy was designed to impact the car in the manner of a child and to record the effects on a child’s body. With the Focus 3D, we were able to record the whole scene and create highly detailed documentation of the deformation of the car – especially the bonnet. Using the FARO, we secured more information on the position of objects at the crash site, and more detail on the deformation of the vehicle, than was possible with the laser scanning equipment we had used previously. This increase in detail has served to add new depth to our documentation.”

As a result, this fundamental baseline data allows DETF to examine the bonnets of similar vehicles after real accidents and to determine the speed the vehicle was travelling at the time of collision with the child. Michal re-enforces this final point: ”At the accident site itself, the Focus 3D allows us to quickly document the scene with generous 3D detail to aid in the analysis, enabling our delivery of reliable, timely evidence to the courts”.