Data for the perfect illusion

It is now impossible to imagine the film and television industry without digital visual effects. The FARO Laser Scanner Focus3D provides important data for the pre-visualisation of film scenes, for the extension of real film sets and for special effects.
Digital visual effects for cinema and TV What do “The Book Thief”, “Cloud Atlas” and “Hotel Adlon. A Family Saga” have in common? All of them are film or TV productions that were set scene by the specialists at RISE | Visual Effects Studios. A FARO Laser Scanner Focus3D was also involved in producing the often breathtaking digital effects.

Burning streets, exploding aeroplanes and cars that plunge off bridges – where traditional special effects reach their limits, digital visual effects are now an essential part of the film and gaming industry. The digital artists of RISE | Visual Effects Studios play a leading role in this field. The Berlin company has specialised in visual effects, or VFX, and offers professional scanning services under its brand Pointcloud9. The use of CGI (Computer Generated Imagery) has grown enormously in recent years. A driving force behind this is of course the film industry, but also the major car manufacturers. With the appropriate expertise and the correct modified 3D software tools, rendered images can now be produced with such quality that they cannot be distinguished with the naked eye from a photographic image. The best examples are the shots that RISE processes for national and international film productions. In the hands of the VFX artists fascinating images are created – along with the perfect illusion on the screen.

The digital artists are particularly in demand when conventional methods are not sufficient or are too costly to produce the required scenes. “Using point clouds, 3D models can now be created in significantly less time than without these basic data. The resulting 3D models extend or even replace the real film sets,” explains Rayk Schroeder, VFX Supervisor and Lead Compositor at RISE. “With the aid of scan data it has become easier, for example, to try out and determine camera positions, focal lengths and timings of actors and camera movements in advance on the screen. This preliminary planning saves valuable time during filming. “The 3D models are also used for so-called set extensions, meaning the digital extension of real film sets on the computer. Examples of this would be a street that only comprises a few house facades and must be expanded, or a house that only has a ground floor. Another field for which 3D scans provide vital support is so-called match moving. With the aid of this technology, virtual objects are seamlessly inserted into moving film or video recordings. To achieve this, the camera movement must be analysed in detail on a computer. “If a geometry of the filmed location is available, this can be used as an aid,” says Schroeder. “In the software, distinctive points from the filmed material are assigned to the geometry. This enables more accurate and often also quicker analysis of the camera movement. “In addition, lighting options can be precisely calculated.

None of this elaborate preliminary work is visible on screen. An example from the film “Cloud Atlas” by Tom Tykwer and the Wachowskis: For the film, the team at RISE created a street scene in San Francisco in the 70s – but the material was filmed in modernday Glasgow. To do this whole streets in Glasgow were scanned with the FARO Laser Scanner Focus3D and used for camera match moving. The specialists incorporated telegraph poles characteristic of San Francisco into the streets and replaced some of the houses. Using the precise scan data everything was able to be modelled to the right scale and positioned in the appropriate places.

In one scene in the film “Cloud Atlas” a car is pushed off a bridge. “This scene was filmed on the runway of the former Tempelhof Airport,” says Schroeder. Part of the original bridge in Glasgow was captured with the FARO laser scanner. From this it was possible to develop a complete bridge with lights, barriers and kerbstones and combine it with the surrounding CG landscape – both by day and by night. The shots with the car were then filmed in front of a blue screen and the bridge by RISE was inserted. For the film “The Book Thief” RISE made a whole row of houses explode – the basic data were also provided from scans done by the FARO Focus3D. First the whole street was scanned, then the art department constructed the scenario as if there had been an explosion. This means the houses were demolished and several tons of rubble were spread around – then this scene was scanned again. Now the specialists in digital effects took their turn: They simulated the explosion with the aid of the scans until the scene exactly matched the final state of the demolished original street. RISE uses experience from national and international film projects to refine and further develop its own methods. One current example is the flexible lighting of 3D scenes in which HDR images (High Dynamic Range) are projected onto complex geometries. A FARO laser scanner and an automatic panoramic head are used here, which photographs spherical panoramas with different exposure levels. The Berlin company developed a LiDAR workflow with HDRI lighting for the processing. The result is perfectly illuminated objects. An example: a CG car drives through a dark gateway into a light courtyard – the viewers see how the reflections and lighting on the car fit the surroundings perfectly. Sounds amazing – and it is.

by Katharina Acar | Oct 28, 2010
With the FARO Laser Scanner it has been possible to digitise in 3D the office of Charles V at the Palace of Vincennes and to construct a skinned 3D model on the basis of a mesh model. 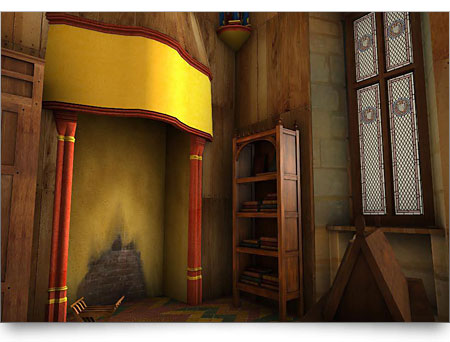 With the FARO Laser Scanner it has been possible to digitise in 3D the office of Charles V at the Palace of Vincennes and to construct a skinned 3D model on the basis of a mesh model.

Art Graphique & Patrimoine, a specialist in dimensional drawings of buildings and works of art, has used the FARO Laser Scanner to create virtual mock-ups, which in turn have been used to create spectacular enhanced reality applications The use of enhanced reality has rapidly become part of everyday life. This new technology, which enables the superimposition of virtual elements onto reality, is rapidly gaining in popularity. In the cultural heritage sector and museums, it opens up new options for presenting sites and works of art. It is thus possible to display missing or lost elements, to provide complementary information, and to reconstruct historical scenes and décor in a manner that is at once spectacular, playful and educational.

ART GRAPHIQUE ET PATRIMOINE (AGP) uses FARO for exceptional presentations. The exciting nature of the applications offered by AGP is based on two components: the quality of the 3D replication and the precision with which the virtual tableau is superimposed on reality. This superimposition must be perfectly adjusted as the intersections between the real and the virtual must be created with seamless accuracy.

The FARO Laser Scanner is especially suitable for this purpose as it is able to rapidly capture the real setting with a high degree of precision. The point cloud generated by the digitisation process is then meshed and textured to create a 3D model. To date, AGP and its partner AXYZ (a company specialised in synthesised images and real-time 3D applications) have created two exciting applications, both of which have garnered praise from the public. The first is an enhanced reality replication of the study of Charles V, at the Château de Vincennes, as it was in the 14th century. It was created in the context of “Futur en Seine”, an exhibition of digita industries and lifestyles in the Paris region, in June 2009, by a group led by AGP, AXYZ and CNRS with the support of the Head Architect of Historical Monuments.

The site, managed by the Centre des Monuments Nationaux, has been equipped with positioning markers enabling a laptop to display the scene in real-time in step with the changing position of visitors in the room. The FARO scanner has been used to digitise the king’s study in 3D, providing the basis for the construction of a virtual 3D mock-up of the room, which is accurate to the nearest millimetre. The result is fascinating and gives the visitor a new, direct impression of what the royal study was really like. 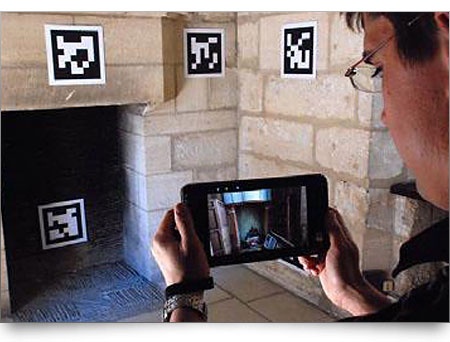 Application on site at Palace of Vincennes, with visible
markers and mobile unit 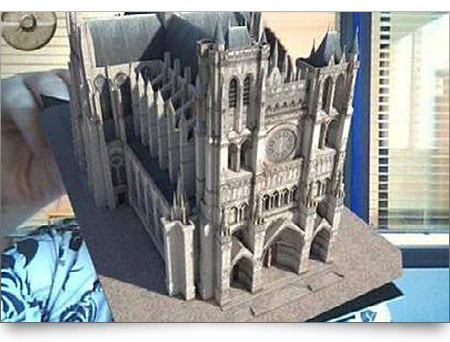 In June 2010, the city of Amiens decided to present its municipal pageant with the aid of an enhanced reality system on the internet. AGP, with the active support of AXYZ, created a model of the cathedral in only 1 month on the basis of the point clouds generated by the FARO scanner. The data were integrated into an enhanced reality programme with no visible markers, developed by TOTAL IMMERSION, the world leader in this area. The application is downloadable from the internet and is available at 3 terminals at 3 strategic locations in the city. Amiens saw attendance of its pageant increase by more than 30% this July. These two applications are good examples of the combination of the quality of measurement and content, AGP and FARO’s core competencies, uniquely staged to provide the public with a new experience.

ART GRAPHIQUE ET PATRIMOINE is an SME that has specialised in creating dimensional drawings of buildings and works of art for 15 years. AGP has worked on more than 500
prestigious historical monuments in France and abroad, including Notre Dame Cathedral in Paris, Mont Saint Michel, the Louvre, the Palace of Versailles, etc. Abroad AGP has conducted
surveys of the Lomonosov University in Moscow, the Marinsky Theatre in Saint Petersburg, and of monuments in Albania, Madagascar, Tunisia, Afghanistan, etc. AGP is also involved in the conservation and promoting public appreciation of heritage by producing films, interactive
applications, enhanced reality, books and DVDs. AGP uses state of the art technologies for lasergrammetry, photogrammetry and 3D restitution, including in particular a 3D FARO Laser Scanner.
www.artgp.fr
E-mail: artgp@artgp.fr

The FARO Laser Scanner Focus3D is a portable non-contact measurement system using laser
technology to accurately capture measurements. The system rotates 360° and automatically measures everything within the line of sight from the scanner´s position.

Efficient: The long range of up to 120m, the level sensor, the compactness and ease of use and the autoregistration at no extra cost result in up to 50% savings of scan and processing time compared to conventional laser scanners.

Revolutionary simple: Due to its intuitive control concept with touchscreen display, the Focus3D is as easy to operate as a digital camera.